Getting a good crop canopy across the entire field is important for better crop quality and higher yield. One way of achieving this is by varying the amount of seeds. In recent years more and more farmers have started using variable-rate technology. By coupling the tractor’s GPS equipment with the seed drill, the seed amount can be varied across the field based on a predetermined plan.

The decision support for varying the seed rate can be obtained from different sources. Laboratory analyses of soil samples is one option. However, farmers often take one sample per hectare or less. To obtain a map, one then has to interpolate between the samples and that means less accuracy. To get around this, the lab analyses can be combined with on-the-go sensor measurements of soil electrical conductivity. If this field sensing is done first, it can also be used to direct the soil samples to more strategic locations. The conductivity measurement then maps the variation and the soil samples set the levels in absolute numbers. The result is a more accurate soil texture map that can be used to guide the variable rate sowing.

Another option is to base the seed rate on yield maps from previous years. If you already have the combine harvester that collects yield data, you only need to convert your yield maps into a variable rate seed application file. Parts of the field that yield poorer may increase their harvest if the amount of seed is raised there. Parts with high yield may withstand a lower seed rate without losing yield while reducing the risk of crop lodging.

A third option is based on vegetation index maps in previously cultivated crops. Using drone imagery from an early stage of last year’s crop when establishing the next is an interesting alternative. As data collection with drones is almost weather independent, the most appropriate growth stage of the crop can be chosen. For a fall crop, late or early spring should be suitable and for a spring crop - late spring. What appears on such maps is a confirmation of how past establishment succeeded and in what areas of the field there is a potential for improvement. In the example below, the field was mapped with a drone at the end of March 2017 before spring growth accelerated. The field, that is about 35 ha, took about 20 minutes to fly. The images have then been uploaded to Solvi and converted to an orthophoto. Using analysis tools, the NDVI index was calculated and it showed a great variation in how rapidly winter wheat grew in the autumn:

In parts of the field with clayey soil, the crop may be thin due to dry conditions during the fall. In parts with lighter and more drifting soil, the wheat canopy is denser, but the water supply there may limit the harvest potential later in the spring and summer until harvest. Having that knowledge beforehand, a variation in seed rate might have given a more even canopy of the winter wheat field. When this was noted, this knowledge was used for the next crop, which in this case is winter oilseed rape. Based on the NDVI index from March, an application file was created. 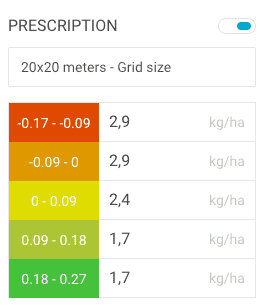 In those areas where wheat became the densest, but actually had lower harvest potential, 35 plants/m² were sown. In the most clayey parts, 60 plants/m² were sown and on the remaining part of the field, the planned 50 plants/m². These figures have then been translated to kilos per hectare and the values ​​of 2.9, 2.4 and 1.7 kg/ha have been entered in the respective fields. With the click of a button, a SHAPE-file was then created, which could then be loaded directly into the seed drill.

Variable rate seed application has several advantages. By taking into account soil variation, you can reduce the number of seeds per unit area without losing harvest in some areas, while minimizing the risk of crop lodging. At the same time, an increased seed rate in other parts of the field, where the clay content is high can help increase crop potential. Using drone imagery is an efficient and affordable way to map the variations in the crop growth in previous years and use it as the basis for application files.